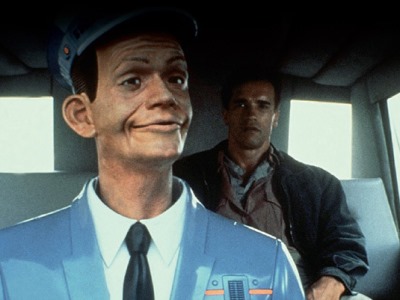 Automation, robots and the ‘end of work’ myth

Tony Dundon, Profesor of HRM and Employment Relations, and Debra Howcroft, Professor of Technology and Organisation, dispel some myths around automation.

Can you imagine travelling to work in a robotic “Jonnycab” like the one predicted in the cult Arnold Schwarzenegger movie Total Recall? The image from 1990 is based on science fiction, but Mercedes Benz does have a semi-autonomous driver pilot system that it aims to install in the next five years and Uber is also waging on a self-driving future. Its partnership with Volvo has been seen as a boost to its ambitions to replace a fleet of self-employed drivers with autonomous vehicles.

Jonnycab might belong to futurology but if MIT (Massachusetts Institute of Technology) academics Erik Brynjolfson and Andrew McAfee are right, we may all be rejoicing at the prospect of extended leisure time, as robotic technologies free us from the drudgery of work. Except for the fact that big business will be keeping its eye on the bottom line and will often be opting for fast and cheap alternatives.

These are not new concepts. Karl Marx argued technology would help free workers from harsh labour and lead to a “reduction to working time”. In the 1930s Bertrand Russell wrote of the benefits of “a little more idleness” and the economist John Maynard Keynes predicted that automation could enable a shorter working week of less than 15 hours.

Claims that robotics will wipe out millions of jobs, from car manufacturing to banking are all too common. But some see a change to how we work running alongside these job losses.

Some envision that digital platforms will empower people to become their own boss with the freedom to choose when and where to work and how much they will earn. And people will be encouraged to earn a living by “mixing it up” – becoming a driver one day (using the Uber or Deliveroo app) and then switching to digital “microtasks” (a small unit of work such as tagging images or translating text that takes place on a virtual assembly line) on one of the burgeoning platforms that make up the gig economy.

A future where work is replaced by leisure time has widespread appeal. But the reality is many people now work longer hours with growing job insecurity, fragmented income and labour market precariousness. If anything, technology has not liberated people from the drudgery of work as Marx, Russell and Keynes once anticipated, but has created new constraints, invading people’s social and leisure time through the digitalisation of life.

The ability to use technology to automate does not necessarily lead to implementation. Of the US companies that could benefit from robots, only 10% have opted to do so. For low-skilled and low-paid sectors – including care homes, restaurants, bars and some factories – it will continue to be less costly to employ people.

Consider the last time you had your car washed. The chances are it was not an automated drive-through, but a hand-wash carried out by immigrant labour at lower cost than the automated alternative. In short, while labour remains cheap, employers tend to cash in rather than benefit from the full potential of technologies.

Many employers have little intention of innovating through technology. Consumerism and an almost blind faith in free market principles mean technology is leveraged to extract ever greater profit, rather than provide some of the idleness and leisure time Russell felt would benefit society.

No substitute for people

While automation may replace some jobs, the technology rarely acts as a substitute for people. Instead, jobs become codified and reduced to a narrow range of de-skilled tasks. Technology is deeply connected to relations of power and tends not to wipe away inequalities in a society, but builds on existing inequalities.

The proliferation of digital technologies can be associated with the growth of insecure, intensive and poor quality work at companies which use technology to monitor performance and dehumanise the workplace. The net effect is a polarised labour market of low-skill and low-income workers sitting alongside an elite who enjoy more secure jobs (at least for now).

The future of work seems more likely to revolve around cost-containment strategies which limit investment in infrastructure and efficient technologies. It is more likely that managers will forego efficiency-generating gains from digital technologies because of a fear of losing control. Remember the promise of homeworking in the electronic cottage?

In order to realise Keynes’ vision of a shorter working week, managers would have to share control and provide an employment regime supporting genuine self-determination. Unfortunately, modern capitalist relations and geopolitical systems of governance are intolerant of such egalitarianism. For these reasons, it’s time to draw a close to the “end of work” hysteria. It is sham.

This article was originally published in The Conversation.