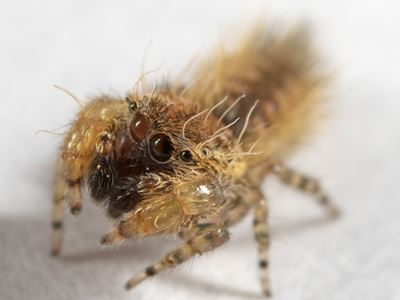 A new spectacular jumping spider has been discovered and named in honour of Eric Carle, the famous author of children’s book The Very Hungry Caterpillar.

A spider expert at the Manchester Museum has confirmed a new species of jumping spider discovered in a park in Hong Kong. The unique spider bears a striking resemblance to a caterpillar leading it to be named Uroballus Carlei, after author of the ubiquitous children’s book The Very Hungry Caterpillar, Eric Carle. The book celebrates its 50th anniversary this year, the same year that Carle turns 90.

This new species was discovered on the outskirts of one of the most densely settled places on Earth, within sight of the high-rises of Chai Wan in Hong Kong's Eastern District. Naturalist Stefan Obenauer made the exciting observation and contacted Dr Dmitri Logunov, Curator of Entomology at The Manchester Museum, who is a recognised expert on jumping spiders. Dmitri examined this species and confirmed it to be previously unknown to science. The species was formally described in the Israel Journal of Entomology.

Jumping spiders have evolved superior vision, aiding them greatly in their unusual mode of hunting. Apart from a battery of larger and smaller eyes on their foreheads, they typically have at least one other pair of eyes on the back edges of their thorax, giving them all-round and binocular vision and a precise judgement of distances.

As typical for the jumping spider family, they spin no web to entangle their prey, but rather stalk small insects and similar animals on foot, and jump at them from quite some distance, in a similar manner to cats. This is why they are often called ‘eight-legged cats’. Among their victims are many nuisance and pest species, in particular flies and bugs. 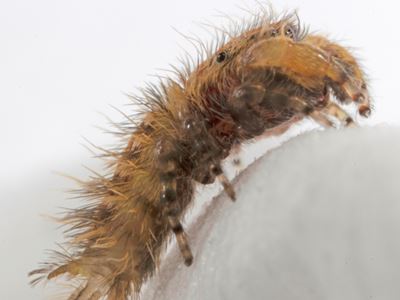