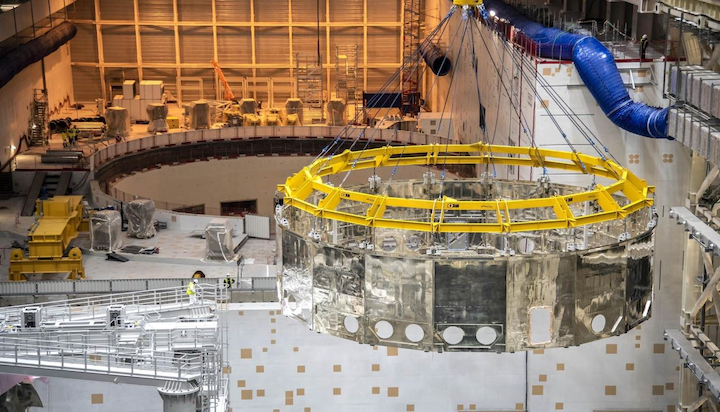 A new partnership has been signed between The University of Manchester and the UK Atomic Energy Authority (UKAEA) to help accelerate the country’s progress toward Net Zero Carbon targets through the development of fusion energy.

A memorandum of understanding has today (March 30) been signed by the two organisations to kick start a major collaboration for the research and development of sustainable energy produced by fusion.

Fusion is a very attractive alternative energy source that, when commercialised, will generate electricity without greenhouse gases – with abundant fuel supplies around the world. The prospect of fusion energy generation becoming integrated in to the UK’s energy mix can offer secure, safe production for thousands of years to come.

Professor Francis Livens, Director of the Dalton Nuclear Institute at The University of Manchester said: “This new collaboration in fusion complements and builds on our long term strength in nuclear research, will allow us to build important new research and training activities in Tritium Science & Technology and Digitalisation, and extend our exciting collaboration with UKAEA.”

Sustainable low-carbon energy is needed and fusion can help meet this demand. Fusion has now reached the point where significant investment is being made internationally to develop a commercially viable solution. Work so far has been closely integrated with the European Fusion program and in the development of ITER (International Thermonuclear Experimental Reactor) in France.

Martin O’Brien, Head of University Liaison at the UK Atomic Energy Authority, said: “Many universities already work with us on a wide range of research topics. We are excited that The University of Manchester will now expand greatly its work with us in two key areas where progress is needed to deliver a fusion power station.”

Fusion energy is an area of national and international priority and has been explicitly identified in Government’s Ten Point Plan for a Green Industrial Revolution, and in the December 2020 Energy White Paper.

Through UKAEA, the UK Government has already committed £220 m over 4 years to develop the STEP (Spherical Tokamak for Energy Production) concept with the aim of building a power station based on the STEP design by 2040. This is an area where new research is required to address some of the significant challenges in realising STEP and will continue to be a focus of external investment.

This new agreement between The University of Manchester and UKAEA will see a significant addition to the University's Dalton Nuclear Institute’s research activity, expanding what is already the UK’s largest and most connected academic provider of research and development. Two new research groups will now be established, with six new high quality academic appointments.

The University of Manchester has set ambitious goals to be zero carbon by 2038 and will eliminate avoidable single-use plastics by 2022.

Energy is one of The University of Manchester’s research beacons - examples of pioneering discoveries, interdisciplinary collaboration and cross-sector partnerships that are tackling some of the biggest questions facing the planet.