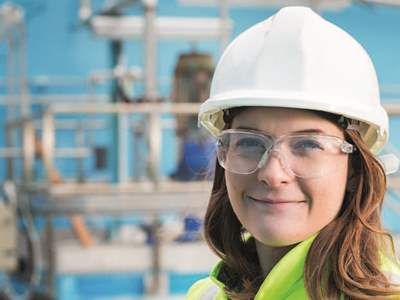 Indian conglomerate Tata is probably best known in the UK for its ownership of Tata Steel. But closer to home in the North West its chemicals business also owns British Salt which produces around half of the UK’s pure salt from its factory in Middlewich, Cheshire.

Until now British Salt has been exclusively a B2B company. But the company is looking to expand its reach into the UK consumer market in an attempt to mirror the success of its Tata Salt operation in India where its packaged iodised salt is the biggest salt brand in the country.

As Elle Perschke, Brand Development Manager at Tata Chemicals Europe, explains: “In particular Tata wants to market in the UK a salt product that is fortified with iodine and which has been shown to have health benef its. Due to changing diets, as a society we are increasingly deficient in iodine and this has particular implications for pregnant women because iodine def iciency can affect child development. The consumption of iodised salt also has strong benefits for cognitive development.”

Having recently completed a Masters in Marketing at Alliance MBS, Perschke was brought on board by British Salt to head up a Knowledge Transfer Partnership (KTP) with Head of Business Development Dr. Richard Diggle who had previous experience of running a KTP project. Adds Perschke: “For any successful KTP what you are essentially trying to do is build knowledge on both sides which then leads to transformation.”

She says there were particular challenges posed by this KTP. In particular, although the benefits of iodised salt are well-known in health circles, they are not as well-known more widely among consumers who, generally speaking, see salt as bad for their health.

“One of the first big challenges we therefore faced with launching this product was getting over concerns that ‘salt is bad for you’ and we’ve done this by collating existing research into the benefits of iodised salt.”

One of the first steps of the KTP was to set up a number of focus groups across the UK to establish consumer knowledge in order to formulate branding messages around the new product.

Adds Perschke: “What we found was that consumers know hardly anything about this product and that they are also intimidated by the word iodine itself. The focus groups also talked more widely about nutrition in general, and here it was clear that there was also a general lack of awareness around nutrition too. There is a lot of confusion in the market about what is and isn’t good for you, and that makes getting the positive health messages across even more difficult around this product because of the perception that all salt is bad for you.

“For instance, do people know how much salt a day they should be having? For most people the answer is no. The actual answer is six grams, but the average consumption in the UK is nearer eight, most of which comes from processed foods. Given these challenges, the design of the new product and the educational messages on its labelling become particularly important.”

Earlier this year Perschke presented a proposal around the product to the British Salt board and has also met with PR agencies with a view to launching the product by early summer.

Meanwhile for the academic lead at Alliance MBS, Professor of Marketing Hongwei He, the KTP – which runs until Spring 2020 – has already brought tangible benefits.

“The data that Elle has already collected will help us carry out a major longitudinal study into how companies can make the transition from selling in B2B markets to B2C markets. This will be an excellent case study of how a company should approach this challenge and will offer guidance for other companies in other sectors.” Also working on the project is Gary Davies, Emeritus Professor at Alliance MBS, who has wide experience of working on KTP projects.

Perschke adds that she is enjoying both the research challenge and the experience of working in a major corporation. “The KTP is giving me excellent all round development and I am finding the whole venture really entrepreneurial."