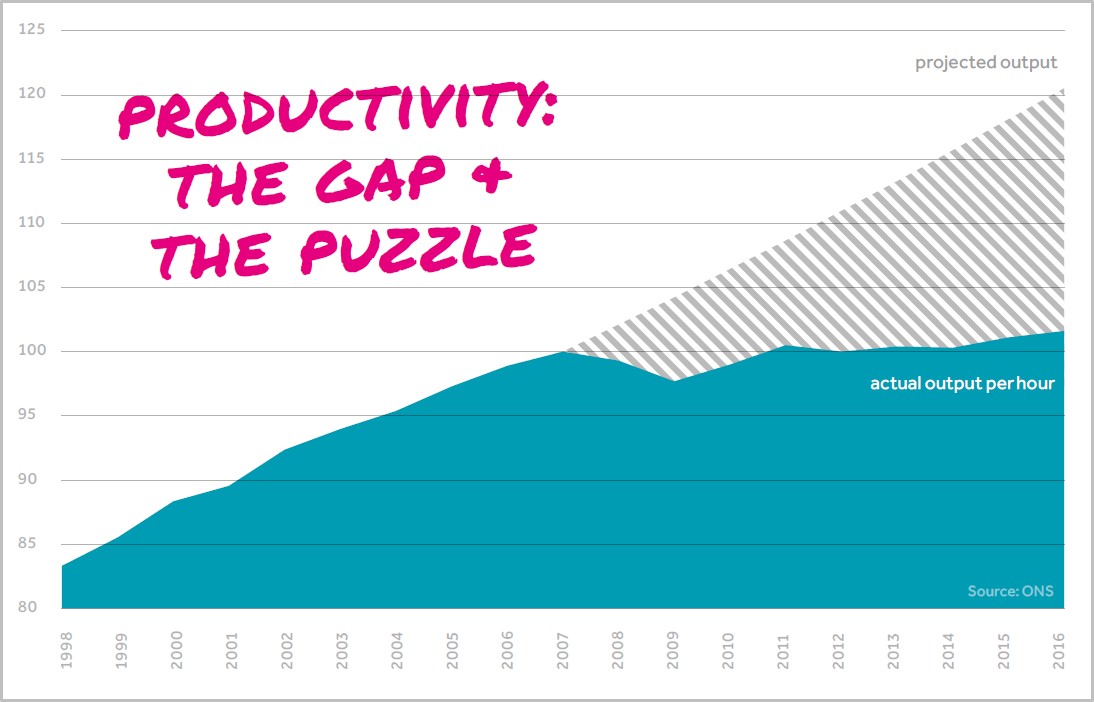 “If we are to tackle this productivity crisis then we absolutely need to take the brightest and best from academia to first understand the problem and its causes, engage with business, and then craft policy solutions which unlock the barriers.”

Former Bank of England Chief Economist, Andy Haldane, who has joined Alliance MBS as an Honorary Professor, discusses how productivity, skills and devolution are key to the levelling up agenda.

Having built up long-established links over many years with both The University of Manchester and Alliance MBS, Andy Haldane says taking up the offer of an Honorary Professorship at Alliance MBS was in many ways a very logical move.

One specific area of public policy that has much vexed Haldane and most economists is the UK’s poor productivity problem, a problem that has accelerated since the global financial crisis of 2008. Indeed the recently launched Alliance MBS-based Productivity Institute, which is precisely looking at these issues, was another major reason for him accepting the Professorship.

“The Institute is a fantastic initiative because it is seeking answers to one of the most pressing public policy issues of the day. If we are to tackle this productivity crisis then we absolutely need to take the brightest and best from academia to first understand the problem and its causes, engage with business, and then craft policy solutions which unlock the barriers.

“It is actually a great example of what I describe as the ‘north star’ of my career, namely working at the interface of public policy, business, and civil society to tackle signature societal issues. Magic happens when all three of these players work effectively in partnership, and that is exactly what the Institute is seeking to achieve.”

But given that in-depth research inevitably takes time, can we afford to really wait around for such findings on a pressing policy issue?

Haldane accepts that this is an issue. “Yes, the productivity challenge is a pressing one. But equally there is no point rushing or come up with policies that don’t last. The key word here is ‘Institute’ which means this is an institution which is here for the long term. Productivity issues are also here for the long term and deep-seated so a durable institute is exactly what is needed, and its true value will come from its longevity and long-lasting research. That all said, I am hopeful that the Institute will have some immediate things to say which are of value to the ongoing policy debates.”

Indeed the productivity crisis has certainly risen to national prominence, inextricably linked as it is with debates over the ‘levelling up’ of the UK economy. As he adds: “Productivity has, and always will be, the well-spring of rising living standards and growth.

“But what is different now, and why it has risen to such prominence, is what has happened over last 10 to 15 years and the fact that productivity has flat-lined which is very unusual. That has turned what was an important issue into a critical issue. Where productivity leads, pay tends to follow, and we have seen a decade of stagnant wages too. Productivity is not some ethereal concept. This crisis ultimately shows up in people’s pay packets.”

So, what does he think are the main reasons for the productivity problem? “It’s a knotty problem with lots of potential causes. For instance, one challenge is about developing the right sort of ecosystem for innovation and business to work in harmony, an aspect of the problem which I have focused on in previous work. The UK has fantastic research capacity, and you only have to walk around The University of Manchester to see how our universities are pushing technological frontiers.

“Often that research translates into successful businesses, but too often it doesn’t and too little of the fruits of innovation trickle down to a wider range of companies. We are brilliant at innovation and less good at diffusing that innovation. In short, we have a broken diffusion engine, and we need to repair it and develop a new one. The truth is that UK plc does very well at the ‘R’ in R&D, but still very poorly at the ‘D’.”

He adds that universities have a fundamental role to play in helping fix productivity by engaging with local and global businesses through both business engagement and knowledge transfer.

“The very presence of a university does a lot to boost income both in that region, and to surrounding regions. As I’ve said where productivity leads, pay and incomes then follow, and universities are no different. It’s why it makes perfect sense for universities to be centre stage both in terms of our national and local industrial strategies.”

There is a big role for businesses to play in this context too. “Knowledge transfer doesn’t just happen through universities but through businesses, so successful companies need to be buddying up with other, perhaps less successful, businesses to help them make the technological transition they need. It is not because of the technology itself that innovation doesn’t trickle down, it is because of people and cultures.”

Haldane says embracing the digital revolution is an obvious area of focus. “Although it has of course been a devastating event, the pandemic has actually helped many businesses become more productive as they further digitalise. The hope now has to be that they continue to build out and build up their digital estate in a way that transforms their business models.

“But the important thing here is that you don’t have to necessarily do this by embracing Artificial Intelligence or machine learning. It could just be about implementing a decent e-commerce platform or CRM system.”

In this broader debate Haldane says we mustn’t lose sight of the skills issue, and particularly the need to revitalise the further education sector.

“That too needs re-energising, not as a substitute for higher education but very much as a complement. If we are to tackle the UK’s productivity problem, we need all of our education engines to be firing.”

However, he says that right now the UK skills deficit appears to be getting worse.  “It is estimated that a third of the workforce across the UK don’t have skills that are well matched to their jobs. Some people are over-skilled, but most are under-skilled. Some of the most acute shortages are digital skills, but there are also deficiencies on the leadership and management side, and on the interpersonal ‘soft’ skills side too. And then there are also glaring deficiencies on core numeracy and literacy skills as well. Without intervention and a reorientation of skills policies, all these deficits will only grow further.”

As with the productivity challenge, he says that no government can tackle this challenge in one parliament.  “It is precisely why deep-rooted policies and institutions are so important.”

Haldane says the third element of this wider debate, alongside productivity and skills, is geographical, and this is where the levelling up agenda comes in.

“The spatial problem among regions is all part of the same problem. If you look at the long tail of low productivity companies, they tend to employ workers with lower skills who tend to live in the most economically deprived areas. So, these problems are all closely interconnected. You cannot tackle levelling up in isolation from skills and productivity.”

However, he believes bringing the three elements together is much easier to do locally than nationally. “What you need to be doing is joining up policies around education, health, transport and business support at the local level.”

So, more devolution is the answer then? “Absolutely. Success in levelling up comes down to delegating powers, people, and finances. Unless you have all three then devolution cannot and will not be a success, and that is the strong international lesson of devolution too. You need to craft local plans that speak to local problems and devolution is an essential pre-requisite for making progress on levelling up. As all politics is local, so is economics too. Because all these inter-related problems are so localised so you need local knowledge to solve them.”

He adds that while Greater Manchester is much further down the devolution path than any other city or region of the UK, even here the ‘powers’ it holds are limited. “Right now, by no means all powers are devolved across Manchester. Yes, it is at the front of the pack relative to elsewhere across the UK and has probably made the most progress, but it is still well short of the powers it needs.”

All these challenges have been only further heightened by the pandemic. But however, devastating it has been, Haldane believes it has thrown up opportunities.

For instance, one positive benefit has been on the way we work. “Pre-pandemic so many of us ploughed onto busy trains or motorways and spent the most unproductive time possible commuting to an office. So, a more flexible, hybrid model of working is surely a good thing for our productivity and our wellbeing.

“At the same time this has been a unique opportunity to rethink business. Companies have changed their business models at a speed and scale never seen before, including digitally. I hope this capacity to change at speed is now firmly in their bloodstream and that has to be good for productivity too.”

He adds that the move to more remote ways of working and doing business could help the levelling up agenda too. “If what we are seeing is a more lasting shift out of city centres then that can only help subregions and satellite towns as more workers and companies will be based there instead.”

Meanwhile for Haldane the pressures brought by COVID-19 only add to the importance of his new role at The University of Manchester and Alliance MBS. “Both have an outstanding global reputation for their contribution to building skills and knowledge and driving innovation and research. These are essential ingredients if we are to build back better, fairer, greener and kinder – and I am looking forward to helping them play this crucial role.” 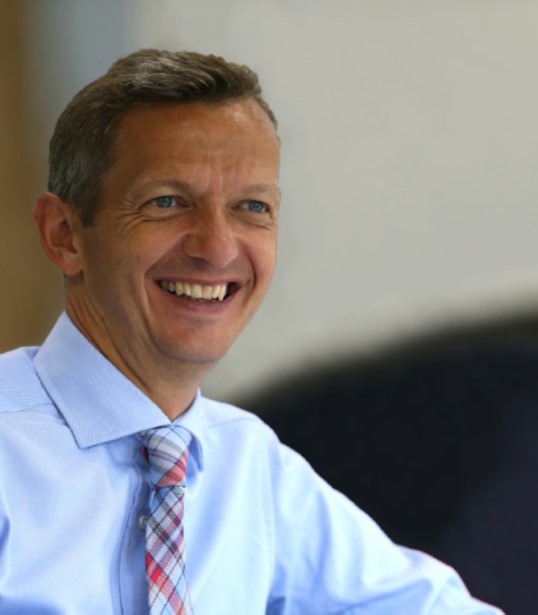 During his 30 years at the Bank of England Andy Haldane became one of Britain’s most influential economists. He stepped down from his role as Chief Economist in June 2021 and will join the Royal Society for Arts, Manufactures and Commerce (RSA) as its Chief Executive in September. Haldane also led the government’s Industrial Strategy Council. In 2009 he co-founded Pro Bono Economics, a charity dedicated to using economics to empower the social sector, while also leading on the Bank of England’s Citizens’ Panel initiative which aims to help the Bank better understand everyday financial and economic concerns, and which in the North-West is chaired by Professor Fiona Devine, who leads Alliance MBS. He has also worked closely with Dame Nancy Rothwell, President and Vice-Chancellor of The University of Manchester, on the Industrial Strategy Council.