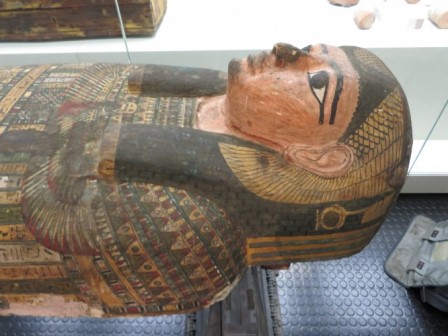 Takabuti, the famous ancient Egyptian mummy on display at the Ulster Museum, suffered a violent death from a knife attack, a team of experts from National Museums NI, University of Manchester, Queen’s University Belfast and Kingsbridge Private Hospital have revealed.

The team, whose findings are made public on the 185 year anniversary of Takabuti’s unwrapping in 1835, also show that her DNA is more genetically similar to Europeans rather than modern Egyptian populations.

The team show Takabuti had an extra tooth - 33 instead of 32 - something which only occurs in 0.02% of the population.

And Takabuti’s heart, previously thought to have been missing, was identified by the state of the art technology used by the researchers as intact and perfectly preserved.

The scans show she was stabbed in the upper back near her left shoulder and that it was the cause of her death.

The findings finally solve the mystery of the mummy which has intrigued Egyptologists - and the public - since she was first unwrapped in Belfast in 1835. It transforms our understanding of Takabuti’s life in ancient Egypt and her journey into the afterlife.

The project was supported by funding from Friends of the Ulster Museum. Kingsbridge Private Hospital facilitated the work by providing their expertise and use of a portable x-ray machine to aid sampling for DNA work.

According to the team, the mysterious object in her body cavity, previously thought to be her heart, was in fact material used to pack the knife wound.

Takabuti lived over 2,600 years ago and died in her 20s. Experts say she was probably a married woman because she was a leading woman living - or mistress – who lived in a Thebes house - where Luxor is today.

She was acquired in Thebes by Thomas Greg from Holywood, County Down and brought to Belfast in 1834.

He said: “There is a rich history of testing Takabuti since she was first unwrapped in Belfast in 1835. But in recent years she has undergone x-rays, CT scans, hair analysis and radio carbon dating. The latest tests include DNA analysis and further interpretations of CT scans which provides us with new and much more detailed information.

“The significance of confirming Takabuti’s heart is present cannot be underestimated as in ancient Egypt this organ was removed in the afterlife and weighed to decide whether or not the person had led a good life. If it was too heavy it was eaten by the demon Ammit and your journey to the afterlife would fail.”

The tests and examination of Takabuti were carried out over a period of months by the team using the latest scanning technologies, leading to new insights into Egyptian high society in the 25th dynasty.

Professor Rosalie David, an Egyptologist from The University of Manchester said: “This study adds to our understanding of not only Takabuti, but also wider historical context of the times in which she lived: the surprising and important discovery of her European heritage throws some fascinating light on a significant turning-point in Egypt’s history.

“This study, which used cutting-edge scientific analysis of an ancient Egyptian mummy - demonstrates how new information can be revealed thousands of years after a person’s death. Our team - drawn from institutions and specialisms – was in a unique position to provide the necessary expertise and technology for such a wide-ranging study.”

Professor Eileen Murphy, a Bioarchaeologist from Queen’s University Belfast’s School of Natural and Built Environment, said: “It has been an incredible privilege to have been involved in modern research that has really helped enlighten us about Takabuti’s life and death. The latest research programme has provided some astounding results. It is frequently commented that she looks very peaceful lying within her coffin but now we know that her final moments were anything but and that she died at the hand of another.

“Trawling the historical records about her early days in Belfast it is clear that she caused quite a media sensation in 1835 – she had a poem written about her, a painting was made of her prior to her ‘unrolling’ and accounts of her unwrapping were carried in newspapers across Ireland. Research undertaken ten years ago gave us some fascinating insights, such as how her auburn hair was deliberately curled and styled. This must have been a very important part of her identity as she spurned the typical shaven-headed style. Looking at all of these facts, we start to get a sense of the petite young woman and not just the mummy.”

Retired Orthopaedic Surgeon and currently honorary lecturer in the University of Manchester's  KNH Centre for Biomedical Egyptology, Dr Robert Loyne who performed the CT analysis and biopsy retrieval of material for a DNA and other analyses said: “The CT scan reveals that Takabuti sustained a severe wound to the back of her upper left chest wall. This almost certainly caused her rapid death. However, the CT scan also reveals unusual and rare features of her embalming process.”

Geneticist Dr Konstantina Drosou said “Takabuti’s genetic footprint H4a1 is relatively rare as it has not been found to my knowledge in any ancient or modern Egyptian population. My results agree with previous studies about ancient Egyptians being more genetically similar to Europeans than modern day Arabs.”

A book is currently being produced by the project team and supported by the Engaged Research Fund, Queen’s University Belfast, and the KNH Centre for Biomedical Egyptology, The University of Manchester. The book will bring together all of the research findings to date on Takabuti.

Details of the new findings can be found in the Ancient Egypt gallery in the Ulster Museum where Takabuti is currently on display. Admission is free.